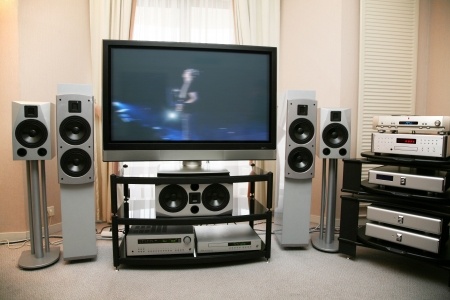 In the 1980s it seemed like everyone had a big “entertainment center” piece of furniture which functioned as a place to put a bulky TV along with several other items like a stereo, record player, VCR, books, objects of art, and whatever else a person wanted to display on its shelves or store in its drawers. These entertainment centers were tall, wide and took up a lot of room.

TV consoles are typically rectangular in shape, fairly low to the ground, and have a space on top to place a TV. Below the TV you’ll usually find drawers to store things and/or open shelf space. In essence, TV consoles are the stripped down version of hulking entertainment centers from a couple decades ago.

Why choose a TV console over a wall mount? Well, even though we all wish we didn’t have to deal with cables and wires, we still live in a world where TVs, DVD players, video game systems and surround-sound systems come with cables and wires. If you have your TV mounted on the wall, how are you supposed to connect all your other items to it without having to constantly stare at a whole bunch of messy cables and wires stretching from the TV down to the floor toward plugs and such?

Sure, you could put several holes in a wall to hide cables and wires behind the wall, but most people don’t do that because it’s expensive, time-consuming, and there’s always the “what if” question in their mind that goes, “What if I want to move the TV to a different area?”

A TV console can easily be moved, and because of its shape, structure and overall look, cables and wires can be concealed in and/or behind it so you and your family or guests aren’t noticing a whole bunch of unsightly cables and wires. Furthermore, because a TV console has space underneath for things like a DVD player or speakers or whatever, it functions well as your mini entertainment center befitting the modern era.

If you have enough room for a TV console, would like some convenient storage space, want to hide cables and wires easily, and have the option to move the whole thing as needed, a TV console is the logical choice.

Call Sherwood Studios at 248-855-1600 for help picking out the perfect TV console for your needs.